Massive stars are factors for material for life 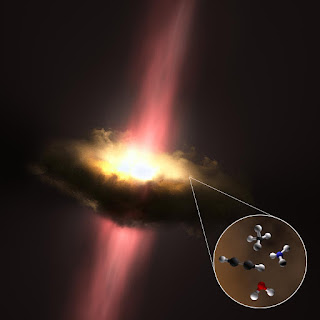 The stars derive molecular energy mainly from the carbon cycle or protein through the methods of proton reaction, and in this process the hydrogen particles of the stars are broken down into helium.  After this, the stars get heat from shrinkage.  Molecular reactions also begin in helium molecules when the internal heat is greatly increased by shrinkage.  Also, stars get energy for a long time.  According to this process, the main basis of the life of stars is the storage of hydrogen available in them.  The energy transmission of stars is proportional to the cube of their mass, which results in the lifetime of stars with greater mass being shorter than the life of stars with less mass.

Hydrogen has the first place in the basic elements of most stars, and second in helium, but some stars also have other basic elements.  Just like water, ammonia, methane and acetylene play the main role in building planets from the earth.  Researchers believe that while newborn stars are formed, planets are also formed.

Now let's understand the formation of the planet, how the planet is formed?  The planets are also formed in the same way as the stars.  According to scientists, a very dense cloud of dust and gases, called 'nebula' (nebula) or nebula, causes stars and planets to form when the nebula starts to shrink due to its own gravitational force.  Small stones and rocks collide around the star in the center to form large pieces, and according to our current understanding, these huge torso finally collide with a loud bang to form plans and other rebel bodies.  , In this way planets and bodies are formed.

A massive disk of dust that revolves around the newborn star, which is about 40 times the size of the Sun, infrared astronomy and the stratospheric observatory SOFIA found that the inner regions of two of these types of discs are filled with organic molecules,  Those considered important for life include water, ammonia, methane, and acetylene, which is a chemical building block for larger and more complex organic molecules.

Stratospheric Observatory for Infrared Astronomy, using NASA telescope data, found SOFIA to provide a new glimpse of chemistry in the interior of large-scale young stars, where future planets could begin to form.  As we know, huge amounts of water and organic molecules are found in these rotating, disc-shaped clouds, which mainly join the planets during the early stages of the formation of some of the major components of life.

Andrew Barr, lead author of the study team and a doctoral candidate at Leiden University in the Netherlands, who states that "we were already seeing more molecular signatures at these wavelengths, and it turns out, the stars are like chemical factories,  Which are churning out the molecules important for life, as we need the right kind of observations to see and understand them.

The infrared observations of the Stratospheric Observatory for Infrared Astronomy (SOFIA) present a unique view of star chemistry, when visible light propagates into its constituent colors, a rainbow appears.  As we know, if infrared light breaks down into its components, it reveals a series of bright lines, called spectra.  Each element makes a unique line, the reason being that the lines act as chemical fingerprints.  Researchers use these creations to understand and identify which substances are in and around the stars.  Researchers can explore small details in chemical fingerprints from the cores of large young stars by using SOFIA's instrument in the coming days, and similarly how high-resolution images reveal small features.  The mass of stars that we know of is more than 40 times the mass of our Sun, could be a reference for NASA's James Webb Space Telescope, which, among other types of targets, is the Sun's  Will study the formation of shaped stars.

This study is very exciting for researchers, as it would demonstrate the power of infrared observatories to characterize the presence of important organic compounds, for the origin of life on Earth.  Project scientist Claus Pontopidan of Webb Telescope says that one of the most important goals of both Webb and Sofia, the Institute of Space Telescope Science, will help understand the origins of stars and planets.

We understand the reaction of stars and planets well, stars are formed by the celestial cloud, which feeds the rotating disks of gas and dust into a central core.  SOFIA has detected two disks, this reaction occurring around two massive stars, AFGL 2591 and AFGL 2136, both seen in the constellations Cygnus and the Baazigar Nebula, about 3,000 light years away.  The observatory discovered that the inner regions of these disks are heated from the inside out, causing the gas around the core to turn into a completely different structure.  The regions are warming up, which is within the disk, where the planets are formed, where there was a chemical soup of organic molecules including water, ammonia, methane and acetylene, now a chemical building block of larger and more complex organic molecules.  As it exists. Further study of other massive young stars by SOFIA in the future will deepen our understanding of understanding the processes of making organic molecules.

September 25, 2020
The Sun, whose mass is about 109 times more than our Earth, and as we know, the Sun is a ball of fire, whose life on earth is possible only with light. How much we know about the Sun, we know just as much as our scientists have discovered about the Sun.  Do you know, the atmosphere of the Sun is warmer than its surface, and it remains a mystery to scientists even today, how it is possible that its atmosphere is warmer than the surface of the Sun, to reveal the secret  Therefore, scientists are studying the Sun very closely.
In a paper published in Nature Astronomy on September 22, researchers reported the first clear images of nano-jets, the bright thin light that travels perpendicular to magnetic structures in the solar atmosphere, known as the corona. In another process, which reveals the existence of a single, potential coronal heating candidate nanofluors.Researchers want to know the answer to those questions to understand why the Sun's atmosphere is so much warmer than the sur…
Post a Comment
Read more