Researchers have discovered the age of the Moon through Earth's magma ocean. 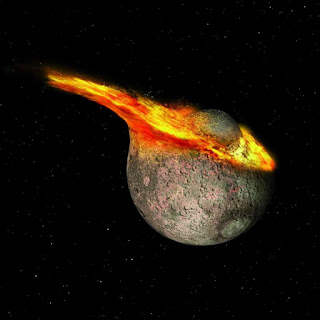 The moon is the satellite of our Earth, 384,400 km away from our planet, its size is 30 times the diameter of the Earth, which we can see in the sky at night, the part we see, the whole part of the moon  Does not happen, we can see only 59% of the moon. How much do we know about the moon, and what do we know, whether the information we have about the moon, is it really the right information. Friends, as we know, the age of the moon is 4.51 billion years, and if I say that this age of the moon is not right, and its correct age is 4.425 billion years.

A new research has revealed that the age that was previously described about the Moon was formed a little later than the time, the researchers believe, that the Earth was in its young phase, when Mars was The shape was destroyed in a collision with a protoplanet young Earth, a new body formed by the debris extracted during this collision, which we know as the moon. The Planetary Geophysicist of the German Aerospace Center (Duchesse Gentrum für Luft-DN Roumfurt; DLR), led by Maxim Maurice, together with researchers at the University of Munster to reconstruct the time, to better understand the age of the moon. New numerical model is used, which shows the exact age of the moon.

What new research shows about the age of the moon, the moon was formed during the young state of the earth, let's understand it in detail, friends four and a half billion years ago, the solar system was still chaotic, and  The Earth was moving towards its present shape, and in the meantime was gathering as referred to as planetesimal, forming dust and gas in the early days as an orbit of the Sun.  The young Earth is sometimes warming inside, and rapidly, large parts of the rocky crevice were melting, which formed a magma ocean, a time when the Earth received a natural satellite, which  Even today it is revolving. A massive cosmic collision between the Earth and a protoplanet is believed to have removed the rock from the young Earth, due to which the debris had collected to form a new planetary body - the Moon.

The theory given about the moon is given, most of the scientists agree with that theory about how the moon formed, but do not know the details of th process, and also do not know about that time. Is at the time the moon was created. Maxim Maurice states that our latest modeling results show that the young Earth collided with a protoplanet about 140 million years after the solar system was born 4.567 billion years ago, and by our calculations, the event is about 4.425  Billion years ago, and the moon was born with an uncertainty of 25 million years. At the time the moon was formed, at that time, our own Earth developed into just one planet, and during this development, heavy metal components sank into the center of the Earth, forming a core of iron and nickel, Which was surrounded by a thick mantle of silicate rocks. Mantle rocks rapidly heated up due to the process of accretion and the decay of radioactive elements. This allowed the separation of metals and silicates into the interior of the Earth within a few tens of millions of years.

A protoplanate caused the formation of the moon.

Friends, as we know, and we have also read, that while the solar system was being built, and during that time many protoplanets passed through the solar system, some were destroyed due to protoplanate collisions, and as dust mites Used to revolve around the planet. According to the researchers, when Earth was still young, a protoplanet collided with the Earth, the size of Mars, which is named Thia, Thia was one of the Titans in Greek mythology, and the mother of the moon goddess Céline  was. During the violent impact, many thousands of Earths have been hit by the protoplanate, which caused such a large amount of material to be ejected from the planet's mantle, and the one that made it possible for the moon to form. The kilometer-deep magma ocean was formed, but over time all the traces have disappeared, which were formed due to thia.

At the time of the creation of the solar system, we need a lot of imagination and creativity to reconstruct how the formation of the moon was triggered by the occurrence of protoplanate. The collision of the two bodies, with its enormous energy, also caused a large amount of rock to evaporate from the Earth's initial mantle, before it reached there to form the rock and it was fired into a ring of dust around the Earth. And this dust started gathering together, which led to the formation of the moon. Doris Breuer, head of the Planetary Physics Department at the DLR Institute of Planetary Research and co-author of the study, explains, "In a short period of time, the moon was formed in a few thousand years.

The oldest rock in the moon is not sufficiently old.

Scientists agree to a large extent on the history of the moon, how the moon was formed, however, scientists have not been able to trace exactly the date when the moon was formed, there are six Apollo missions to the moon, And each time astronauts and three Soviet Luna robotic missions were brought to Earth, none of the lunar rocks has directly recorded the age of Earth's natural satellite. Researchers at DLR and Münster University have determined that when the moon was formed using a new, indirect method, but another co-author in a new study, Sabrina Schwinger, says that our calculations show that, It is most likely that the Earth would have been completed when the Moon was created.

Researchers say that it is not only Earth, which was an ocean of magma in its early youth, because the energy derived from accretion also created a magma ocean on the moon. It is believed that the Moon was melting almost completely in the early days, and it was covered by the Magma Sea more than 1000 kilometers deep, just like the Earth. This magma ocean began to freeze very quickly, and the supernatants began to form a layer of light crystals, and - with cold space it 'interfaced, but under this insulating crust, which magma  Slowing the cooling and solidification of the ocean, due to which the moon was melting for a long time. Scientists have so far been unable to determine how long it took for the Magma Sea to completely crystallize, which is one of the reasons why scientists could not conclude the original form of the Moon.

Scientists have used a new computer model to calculate the lifespan of the moon's magma ocean, with the help of which will determine the age of the moon, for the first time scientists have considered the processes involved in mass magma freezing. While Maxim Maurice states, "The results of the model suggest that the moon's magma ocean must have survived for a long time, and has completely frozen in mantle rock for about 200 million years. Maxim Maurice's Ph.D.  The second author of the study and consultant, DLR colleague Nicola Tosi, says the calculation time in previous studies was too long, and older models were given a solidification period of only 35 million years by scientists.


Scientists get to know the age of Earth and Moon with the new solidification model.

In order for scientists to determine the exact age of the moon, they had to go one step further. Scientists have calculated how magnesium and iron-containing silicates form minerals, and how the magma formed during the freezing of the ocean. Researchers have discovered huge changes in the composition of the leftover, magma ocean.

The discovery of the magma ocean is important for scientists, as it allowed the authors to link the formation of different types of rock on the moon to a certain stage in the development of their magical ocean.  Sabrina says that by comparing the measured structure of the lunar rocks with the predicted composition of the magma ocean from our model, we were able to bring the evolution of the ocean back to its starting point, and the time the moon was formed  Was

The results of the study, conducted by scientists, show that the Moon was formed 4.425 billion 0.025 billion years ago. The exact age of the Moon with the uranium-lead method for the formation of the Earth's metal core, is in notable agreement with the previously determined age, and the point at which the formation of planet Earth was completed. Scientists directly linked the age of the moon to the event that took place at the end of Earth's formation.