NASA has named the next space telescope as astronomy Nancy Grace Roman. 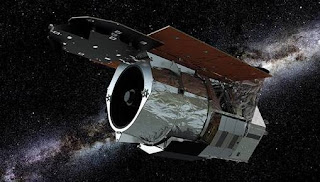 In 2020, NASA is about to launch a space telescope, and NASA is naming its next generation of space telescopes like every time, in honor of Nancy Grace Roman, NASA's first major astronomer, at the Wide Field Infrared Survey Telescope (  WFIRST), which paved the way for a space telescope focused on the wider universe.
NASA's next Space Telescope, named the Neo-Nancy Grace Roman Space Telescope - or the Roman Space Telescope, which will be launched in mid-2020, will unravel the mysteries that remain a mystery to us today, a long time. Till will investigate astronomical mysteries, and discover the mystery behind the expansion of the universe, as well as discover planets that are far away from our solar system. The Roman Space Telescope will help to understand the deepest mysteries of the Universe, such as Dark Matter, Black Hole, will help unravel the unsolved mystery of galaxies, and it will help to understand Gravity Force in detail.
Where Nancy Grace Roman is known as the mother of the Hubble Space Telescope, which was launched 30 years ago, she was instrumental in the creation of the Hubble telescope. Considering the Hubble telescope, it was built, Nancy Grace Roman worked tirelessly for new equipment at the Hubble telescope, which has helped scientists study the wider universe from space, her death in 2018  Having left behind a tremendous legacy in the scientific community.
According to NASA Administrator Jim Bridgestein, Nancy Grace Roman has a hand in the stage where NASA is today, because only because of Nancy Grace Roman's leadership and vision, today NASA has become a leader in astrophysics, and the world  Has launched Hubble, the most powerful and productive space center. Jim Bridenstein says that I can't think of a better name for WFIRST, which would be the successor to NASA's Hubble and Web telescope.
Hubble and former Sen. Barbara Mikulski, who worked with NASA on the WFIRST space telescope, say that it is appropriate, as we celebrate the 100th anniversary of the women's franchise, and that is how NASA announced its new The name of the WFIRST telescope is announced.
Roman space telescope.
The Roman Space Telescope is a NASA observatory designed to solve the questions needed in the areas of dark energy, exoplanets, and infrared astrophysics, which will answer all the questions we want to know. As we know, the Space Telescope has a primary mirror, 2.4 meters (7.9 ft) in diameter, which is the same size as the primary mirror of the Hubble Space Telescope.  If we talk about the Roman Space Telescope, it is designed for two instruments, a wide field instrument and a technology demonstration coronograph instrument.
The Roman Space Telescope Wide Field Instrument will have 100 times more field of view than the Hubble Infrared Instrument, due to which it will occupy more sky with less observation time, as well as higher contrast imaging of a nearby exoplanet of Coronagraph Instruments and  Spectroscopy will also do.
The WFIRST Space Observatory passed an important programmatic and technical milestone in February, which has given the mission the official green light to begin hardware development and testing, with the engineering team finalizing the mission design by building test units and models It will begin to form, and it can be ensured that what has been designed will be conducted during launch and under extreme conditions in space.
Who was Nancy Grace Roman?
On 20 May 2020, it has been announced by NASA Administrator Jim Bridenstein that the Wide Field Infrared Survey Telescope will be named the Nancy Grace Roman Space Telescope in recognition of his enduring contribution to astronomy. Nancy Grace Roman was an astronomy, after whom NASA has named the next telescope. Nancy Grace Roman was appointed to serve as NASA's first astronomer in the 1960s and 1970s, as well as establishing her as one of the "visionary founders" of the US civilian space program.
Nancy Grace Roman was born on May 16, 1925 in Nashville, Tennessee, and died on December 26, 2018. Nancy Grace Roman is told that she was a woman who had a lot of interest in astronomy, where does Nancy Grace go about Roman, that she was interested in science since childhood, until the seventh grade. Had come to know, she wants to become an astronomer.
Nancy Grace Roman graduated from Swarthmore's astronomy in 1946, and a doctorate from the University of Chicago in 1949. She lived in Chicago for six years, and at the same time discovered about the creations of stars, and which had implications for the evolution of our Milky Way galaxy, Nancy Grace Roman took a position in the US Naval Research Laboratory, and was involved in radio waves. Tried to research cosmic questions through the medium. Six months after NASA's founding, Nancy Grace Roman came to NASA in 1959, during which time she served as the head of astronomy and relativity in the Office of Astronomy, as well as programs and grants related to astronomy  Did manage.
Led by Nancy Grace Roman, NASA launched four orbiting astronomical observatories between 1966 and 1972, of which only two were successful, demonstrating the value of space-based astrophysics, and representing Hubble's pioneers, Where is also the mother of the Hubble Space Telescope, which was launched 30 years ago. An international ultraviolet explorer was created under the leadership of Nancy Grace Roman, and was created in the 1970s as a joint project between NASA, ESA (European Space Agency) and the United Kingdom, as well as the Cosmic Background Explorer, which  Two major physical scientists received the 2006 Nobel Prize in Physics for measuring the radiation left over from the Big Bang.
Nancy Grace Roman was a leader and advocate, which is why she has taken NASA seriously in the field of astrophysics and reached new heights, says NASA associate administrator Thomas Zurbuchen, that his name has a place in those hopes. Entitled, which he studied, whose secret was revealed.