NASA will launch a rover on the surface of the moon in 2023. 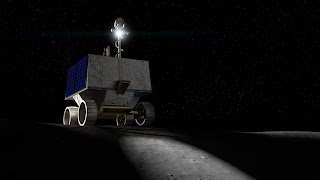 In 2023, NASA is preparing to land a rover on the lunar surface, which will help future astronauts, NASA may face some challenges with the rover launch.  Moon mud is the biggest problem, because the dust of the moon is a formidable adverse, and the grains are like powder and the sharp glass is small, it can be a big problem. To tackle this kind of problem, NASA scientists have designed the rover's wheel in such a way that it can run smoothly on the surface of the moon. We need to understand how the surface of the moon works, how its surface is made, its environment is like it, and who can read the challenges faced by it.

Moon surface and atmosphere.
The moon is formed from the Earth and an unknown planet, this is one of the reasons that its surface is not the same, the surface of the moon has been rained by meteorites for millions of years, due to which the grains of thought have formed, this is the grains under consideration.  Are made of melting rocks, in which small parts of glass and mineral fragments are formed.

The moon has neither its own atmosphere nor its atmosphere, and it is for this reason that there is no wind or weather to create erosion, so grains never lose their rough edges.  The lunar dust gets inside the parts of the dhul in a moving state, so it is so abrasive, like a rover's wheel, that it can damage the system.

How will Rover face challenges on the moon?
NASA engineers have designed each wheel of the Rover with both module active suspension and independent steering, which will serve in any condition. The entire wheel unit of the rover is shielded in a flexible, and protective cover, which will insulate both from the cold on the moon, and seal it against dust, with only the axle extending from this "sock", where the wheel is attached Will happen.

Much technology has been used in this moon-going rover, everything has been finely crafted, right from the wheel.  If the rover's wheel is talked about, its wheel is designed in such a way that its wheels spin around, if for some reason the bursa falls on the surface of the moon, then it will get out in that condition too. The rover's wheel can move in any direction, in fact the rover can withstand the soft soil of the moon, it will be able to bend like a turtle on the beach and pull itself out.