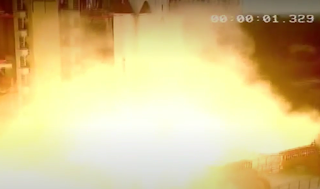 After Chandrayaan,this was ISRO's first launch, successfully completed by ISRO,the PSLV C47 rocket successfully launched a Cartosat-3 satellite and 13 American nanosatellites into orbit.ISRO kept the launch time at 9:28 AM, and its countdown started from 7:30 AM on 26 November.The PSLV-C47 was launched from the Satish Dhawan Space Center in Sriharikota on 27 November.With this success, the morale of ISRO scientists and countrymen is high, because where failure teaches us a lot, the same success increases our morale.

This was the 21st flight of the PSLV-C47 rocket, and the 74th launch vehicle mission from Sriharikota.It would not be wrong if I commend the scientists of ISRO, because the most difficult issue comes only after lift-off, successfully sending the Cartosat-3 and 13 commercial nanosatelites shipped with PSLV, and ISRO.The team completed this task with a successful strategy.The ISRO team successfully injected Cartosat-3 into a 509 km orbit at an inclination of 97.5 degrees at the equator, approximately 17 minutes after lift-off, and also successfully injected 13 commercial nanosatellites from NASA into the designated orbit.

What is the reason for launching Cartosat-3, and what is Cartosat?  Cartoset-3 is a series of indigenous Earth observation satellites built by ISRO. The reason for launching Cartoset 3, it would not be wrong to eye Cartoset 3, because Cartoset 3 is specially designed for Earth's resource management and monitoring. Cartoset 3 satellite series is a part of the Indian remote sensing program.ISRO has launched 5 Cartosat so far, and earlier ISRO launched Cartosat-2 in January 2018.Friends, if we compare Cartosat-2, 3, ISRO has made some changes to Cartosat-3 as before, Cartosat-3 makes imaging satellites with highest resolution and 1 meter MX with high quality resolution.Cartosat-3 is designed by ISRO in such a way that it can potentially be used for weather mapping and cartography.ISRO launched the first Cartoset 1 satellite on 5 May 2005, it was also launched by PSLV rocket. Friends, if there is any question, or if you want to tell me something, then you can ask me the comment box, or if you think I forgot something, tell me something related to this article, then you tell me in the comment box  Can, I will definitely reply.