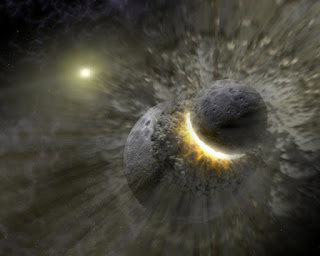 The moon, which has many stories to make, did the violent, and cosmic collision during the making of the moon make life possible on earth? This is a big question, but a new study shows that this is true. Science has given many theories about life on earth, but there is always a question in our mind that how life came to be born on earth.Given by science, has many theories, and tries to explain to us how to find elements for life on our planet: such as carbon and nitrogen elements.

Scientists have previously believed that meteorites have brought life-giving elements to Earth, bacteria with meteorites coming from space for example, and the energy of explosions caused by the continuous fall of meteorites from organic matter.Synthesis of. And the isotopic signatures of these elements on Earth coincide with those objects, but what? The ratio of carbon to nitrogen is not very accurate.If we think of transporting the elements that are important for life on Earth due to meteorites, then each part is 20 nitrogen and 20 parts carbon, this ratio is about 40-1 on Earth.A group of petrologists at Rice University Scientists have discovered that a long-running, collision between the proto-Earth and Mars-shaped object created the moon, and  We shall cause to be met element illuminated life.The research team simulated that phenomenon on a series of basis, to test the behavior of carbon, nitrogen and sulfur during the process of core formation on a rocky planet.The team then formed a rocky core, simulated high pressure and temperature, and estimated how much carbon or nitrogen could be on Mars with a sulfur-rich core.

The researcher's team found that meteorites   that had given significant elements with  known ratios and concentrations of elements on Earth had rained, more likely than not, that they came at once.The team's simulation results suggested that the most likely scenario of the origin of carbon, nitrogen, and sulfur on the silicate portion of the Earth is probably these elements where a rock came from, and is shaped like Mars.This work does not solve the question of how life began on Earth, but it begins to answer the question of how material for life on Earth can be found here.