What is Oumuamua? And where did it come from. 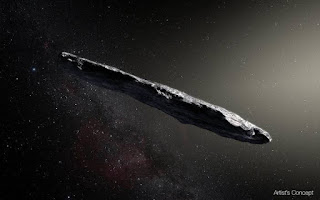 On 19 October 2017, astronomers in the solar system spotted a strange object, a low-active comet of 230 x 35 x 35 meters in size, its color is dark red like most objects in the outer solar system.Discovered by Robert Verick.The astronomer had said that the combination of such an incredible motion of the object and the ridiculous inclination shows that it did not come to us, and not that it belongs to our solar system.  The object was a visitor from some distant, unknown solar system, astronomers named the object 'Oumuamua', because it is an aerial word, translating it to "scout". Astronomers said that until  By the time we saw this unknown object, this object was already going into the depth of the interstellar from where it came. Scientists have described this object as an interstellar comet.

The speed of Oumuamua is so fast, that even the sun's irrational effects could not stop it, and over time our solar system would go away forever.  Oumuamua was dismissed by the series from his domestic system due to some unfortunate events, is it a threat to our solar system, perhaps not, because it would come into our solar system, and go back.
After all, astronomers have hypothesized this, and found that something like 'Oumuamua could come from a single formation system, whether by spreading galaxy fragments into a population of giant planets, perhaps it was just the right gravitational effect.The reasons can be. Astronomers believe that to be clear in such a way that Oumuamua is not like anything in our solar system, it is characteristic of its orbit.Being not leave it, forward, and pinned firmly as Antrastryyl Entrepreneur, it is a strange rocks.
Speaking of Oumuamua, it is only a few hundred feet long, and it is very thin, like a huge space cigar.This object has a dull red color of its own.Oumuamua, by all rights, must be a comet, as distant comets are only loosely bound by their own stars, and are the best candidates for eviction, shattering them in all four corners of the galaxy.But there is one thing that makes this different, that 'Comet has a tail, and the same Oumuamua lacks clear signs of comical activity, and it has no tail.Oumuamua Even though it acts like a comet, it looks like an asteroid. The biggest puzzle about Oumuamua 'is that we saw it like that before.If we consider the scale of time and space of work in the galaxy, how likely is it to be, galaxy stars live and die over the course of millions or billions of years, and the formation of a system takes hundreds of millions of years, and if  If someone has a star-like motion, it takes thousands of years even for high-speed objects, we are only searching for the sky with telescopes, for about 400 years.  What is Oumuamua, it is a thin piece of time to monitor the universe, we have technology to spot and track small, dull, fast moving objects like 'Oumuamua'.
The galaxy can float with just such frequency in these transient objects, it can swing from our neck of the forest for a brief period of time, rocks like Oumuamua are very common.If Oumuamua and his friends are members of the Galactic frequent-flyer club, where do they come from?  And it seems a bit stretchy, something like Oumuamua 'can come from a mature, stable system, because it's a mature and not stable system.