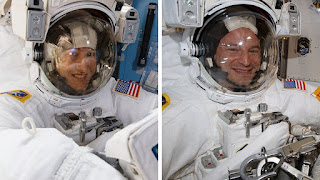 Nasa's two astronauts Christina and Morgan began work on upgrading Iss's power systems, successfully completing the work in seven hours and one minute.The mission was completed by 61 flight engineer Christina Koch and NASA's Andrew Morgan on their spacewalk by 2:40 pm.  During this spacewalk for seven-hours and a minute, two NASA astronauts began replacing nickel-hydrogen batteries with new, more powerful lithium-ion batteries at the station's port truss end.  Nasa showed this spacewalk online through its website.
For the second spacecraft originally from this spacewalk, astronauts were also able to carry out further tasks to remove a fixed additional nickel-hydrogen battery.According to Nasa, this new battery provides a better power capacity for operation with a lighter mass and a smaller volume compared to nickel-hydrogen batteries.On October 11, there will be a spacewalk, in the meantime, to continue battery replacement on the first of the two power channels for the port trusses at the station, followed by the next spacewalk dedicated to upgrade the batteries on October 16, 21 and 25  Will be determined.
Nasa says that after the space station's battery spacewalk is completed, its next spacewalk will focus on repairing the space station's alpha magnetic spectrometer.The dates for those spacewalks of the space station are still being discussed.  But they are expected to start in November.The crew members of the space station have performed 219 spacewalks in support of the combination and maintenance of the orbiting laboratory. Spacewalkers have now spent a total of 57 days 6 hours 27 minutes working outside the station.