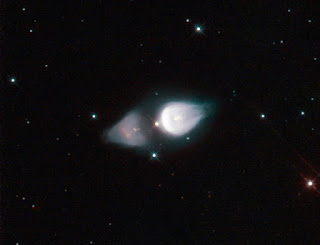 With the Hubble Space Telescope, scientists have captured an event in the Universe, it is a rare rare astronomical event, also called a protoplanetary nebula.It is called Minkowski's footprint by scientists, and also as Minkowski 92 It is known that this nebula has two huge onion-shaped structures,one on either side of an old star, and because of this it is a very special Gives the font size.

Minkowski's footprint shows that the protoplanetary nebula has a shorter life,
and is the initial stage of the more common planetary nebula.A star appears in the middle of this image, and very soon will become a white dwarf, due to its surface beating it will eject the material, the charged particle currents, called stellar winds, make this gas interesting.Shaping in shapes

Scientists believe, technically Minkowski's footprint is currently a reflection nebula, visible only due to light reflected from the central star.  After a thousand years, the star will become hot, and because of this its ultraviolet radiation will light the surrounding gas from within, causing it to glow, and it will become a complete planetary nebula.

Scientists say, the processes behind the protoplanetary nebula have not yet been fully understood, but this makes such observation even more important, as Hubble has done, in the past, sterling work in this area  , And it is ready to continue it even further.

This image was obtained by the Hubble telescope with the Wide Field Planetary Camera 2.The image has several exposures made through four different color filters. The color of the light is blue (F502N) by ionized oxygen, and the light passing through the green / yellow filter (F547M) is colored cyan,  The color of light from atomic oxygen appears yellow (F631N), and its ionized sulfur has a light color of red (F673N).  The total exposure time per filter was 2080 s, 960 s, 2080 s and 1980 s, respectively, and the same field of view is just beyond 36 arseconds.