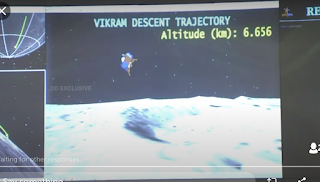 Signal was stopped from the Vikram lander just 2.1k.g before the landing,and for some time there was silence in the center of ISRO,
as the Vikram lander was seen up to 2.1 k,g altitude with normal performance.
Subsequently,communication from the Vikram lander to ground stations was lost.The data was analyzed by scientists,
but nothing came out, even though contact with the lander-rover has been lost, but expectations from the orbiter are still.

Vikram Lander kept contact with the lander for a distance of 2.1 km from the moon, but after that the contact broke, scientists could not contact the lander again.Siwan of ISRO ceo says that only after studying the data that has been received at the last time of landing, the cause of contact breakdown will be known.On this occasion, Prime Minister Modi, who was present at ISRO's headquarters in Bengaluru, took updates from scientists.When ISRO chief Sivan was giving updates to the PM, then fellow scientists patted him on the consolation.

Last minute opening night for Chandrayaan 2At 1:38 pm there was a process of rough breaking, and its programming was done in Chandrayaan before then.
Vikram Lander, which is exactly 30 km from the lunar surface at 1:40 am, started descending controllably; at 1:40 pm when Chandrayaan started landing on the lunar surface, its speed was 6 km per second, meaning 21600  Km per hour.Fine breaking began to slow the lander at 1:48 pm.And its process was already programmed in Chandrayaan.When Vikram Lander At 1:48 the fine breaking process started, the lander's distance from the moon was only 2.1k.g, and in the nightAt 1:51 am, the figures stopped getting from the lander, and thus Vikram Lander's journey ended.  But hope still remains.