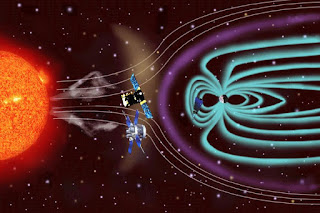 NASA's spacecraft Magnetospheric Multiscale mission -mms-, some time ago, measured the high-resolution of the Interplanetary Shock. It is a shock. And these shocks occur everywhere in the universe, they are made up of particles and electromagnetic waves, which are projected by the Sun.In order to learn about large universal events, we need to measure the Interplanetary Shock at the right time.

What is interplanetary shock.

Interplanetary Shock is a type of collisionless shock - those where particles transfer energy through electromagnetic fields rather than bouncing directly into each other.  These collision shocks are a phenomenon found throughout the universe, including supernovas, black holes, and distant stars.  Interplanetary shocks begin with the sun's rays, as it continuously releases currents of charged particles called solar wind.

Solar wind comes in two ways - slow and fast.  When a strong current of solar wind overtakes a slow current, it produces a shock wave, such as a boat moving through a river produces a wave. This wave propagates throughout the solar system.

This suite of instruments can measure ions and electrons around the spacecraft up to 6 times per second.MMS helps us understand the boundary between black holes and neutron stars, and the heliosphere of our solar system, in the atmosphere of the Sun and other stars, as well as elsewhere.