NASA is partnering with 12 American companies for the Artemis mission. 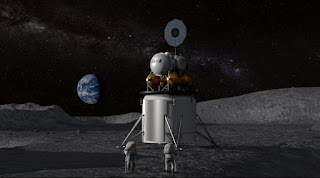 American Space Agency NASA has just announced a few time ago, is partnering with 13 US companies, which will bring significant technologies to the moon for NASA's Artemis missions.And NASA will help in establishing a permanent human presence in space, and further with the cooperation of companies.
NASA has selected 13 American companies from 19 American companies to mature industry-developed space technologies, and to maintain American leadership in space.  It was first 12 American in 2018.
NASA's Artemis Mission.
NASA has planned to launch human beings with the Artemis program by 2024, the same companies are developing new technologies; NASA announces Mission Artemis, announces the schedule of Moon Mission Artemis, launched in 2024  Gone.Under NASA's mission Artemis, NASA will also launch eight programs by 2024.  Before a person can reach the moon, NASA will also make a small station on the moon.  And through this mission the man will go to the moon, after about half a century later.
This was sent to the first moon, with the name Apollo was the name of the mission. NASA will send Artemis 1 mission to the Moon by 2020, it will not be an astronaut. After this, Artemis-2 mission will be sent, it will revolutionize the moon in 2022 with the crew.  After this, Artemis-3 mission will be sent, this mission will send the astronauts to the moon in 2024, in which there will be female astronauts.
These three missions will be launched by the largest rocket launch launch system. All these missions will be launched by private companies.In the same sequence, private company Maxzer has been selected to prepare the first model of Gateway. The first three missions will be launched by the largest rocket - Boeing Space Launch System (SLS) till now.
NASA and 13 company partnership in Artemis mission.
NASA will partner with those companies, the partnership will move forward in the commercial space sector, and will help bring new capabilities to the market, which can benefit future NASA missions.The same NASA Space Technology Mission Directorate (STMD) Associate Administrator Jim Router has said, "NASA's proven experience and unique facilities will help commercial companies mature at competitive speed, and in the areas of technology needed for NASA missions  Have identified
NASA will make non-reciprocal space act agreements between those companies, which are included in the technology focus areas, which are important for the approach of Mars to explore Mars.
NASA will partnering with Greenbelt and Goddard Space Flight Center to advance the moon navigation.And this collaboration will help to mature a navigation system between the Earth and the Moon, which can supplement NASA's Deep Space Network.The Valkan Wireless and Cubusat Radio Transmitter of Carlsbad, California, will be partnering with Goddard to test the compatibility of space, along with Goddard.
Boston's Airgell Technologies will be able to improve the properties of Flexible Arogel for rocket firing and other aerospace applications, Cleveland  Will work with NASA's Glen Research Center  Littleton and Martin of Colorado will work with NASA's Langley Research Center in Virginia, which will test the materials made from metal powder for solid-state processing.
Improvements in the design of spacecraft working in an existing high-temperature environment.  Citrite Aerosystem Inc. of Wichita, Kansas, will partner with NASA's Marshall Space Flight Center in Huntsville, Alabama.Used to be used for NASA's Space Launch system, more stringent, more fault-free seals than conventional methods of joining with welding torch. NASA will collaborate with NASA's Johnson Space Center in Houston and Goddard to mature a navigation and guidance system for safe and accurate landing.  The company will partner with Langley to catch infrared images of its Dream Chaser spacecraft because it travels faster than the speed of the sound to enter the Earth's atmosphere faster.California's descriptive decalator  Will be created using a rocket.  Together with the Kennedy Space Center in Florida, NASA will work to advance its technology to the big rocket standing on the Moon.  Blue Origin will partner with Glen and Johnson to mature the Fuel Cell Power System for Blue Moon Lander of the company.
System lunar can provide uninterrupted power during the night, which lasts for almost two weeks at most places.  Using the features of the glacier and martial will test light solar cells for flexible solar panels.