According to NASA's LRO and Messenger spacecraft, the Moon and Mercury are likely to have water. 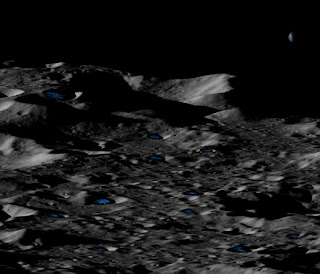 Space Telescopes and Mercury are orbiting, according to observations of spacecraft, Mercury has glacier-like ice deposits, but this type of ice is not yet on the Moon. But thick ice is also present on the Moon.  Scientists at the Lunar Reconnaissance Project at NASA's Goddard Space Flight Center have said that this potential reservoir of frozen water on the Moon could be sufficiently large.The poles of Mercury and Moon are among the coldest places in our solar system.  Unlike the Earth, the spin axes of Mercury and Moon are oriented, which, in their polar regions, the sun never rises above the horizon.  As a result, polar topographic depressions, such as impact craters, never see the sun.And it is permanently hidden, the regions are so cold, that any snow trapped within them could potentially live for billions of years.

Many effects on the surface of Mercury and the Moon are deformed by craters, and these craters are formed when meteorites or comets affect the surface.  Analyzed NASA's smaller and simpler craters, which are formed by less energetic influencers.  Scientists at UCLA took advantage of this inherent symmetry to estimate the thickness of ice trapped within ordinary craters. Nasa recorded about 15,000 simplexes with diameters ranging from 2.5 km to 15 km (about 1.5 mi to 9.3 mi) on Mercury and the Moon.  To measure the craters, used elevation data obtained by Messenger and LRO.  And researchers found that craters are up to 10% near the North Pole of Mercury and the South Pole of the Moon, but not at the North Pole of the Moon.
Researchers found that the pole-facing slope of these craters, and their equatorial-slope, is slightly shallower than that, and that the tropism is more important in those areas, detected by scientists, topographic signs in smaller simple craters  Relatively more prominent, larger craters at the lunar lunar pole may have higher amounts of ice.

The LRO is managed by NASA at the Goddard Space Flight Center, the Science Mission Directorate at NASA headquarters in Greenbelt, Maryland and Washington.  This mission was started on 18 June 2009.  LRO has gathered data through its seven powerful tools, and it is an invaluable contribution for us, about the Moon.The spacecraft Messenger was managed by the Johns Hopkins University Applied Physics Laboratory.  The Messenger spacecraft was launched on August 3, 2004, and began orbiting Mercury on March 18, 2011.
The mission of the spacecraft Messenger ended on 30 April 2015 with a planned impact on the surface of Mercury.NASA is now leading a permanent return to the moon with commercial and international.NASA is ready again, to expand human presence in space and bring back new knowledge and opportunities.