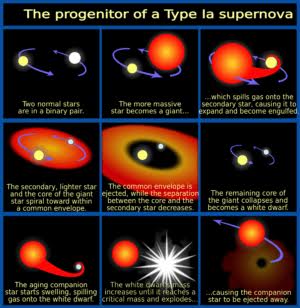 The maximum potential mass of a permanent white dwarf constellation is called the Chandrasekhar limit. This limitation was first mentioned in Wilhelm Andersen and E. C. Stoner in his papers published in 1930.  But astronomer Subrahmanyan Chandrasekhar of India, in 1930, at the age of 19 years, freely discovered this limit and made the count of this boundary more pure.
At present, the approved value of Chandrasekhar Bound is approximately 1.39 (2.765 × 1030 kg) is.Subramaniam Chandrasekhar renders the theory about the constellations of 'White dwarf', i.e. the 'white dwarf'.
The limit that they have set for these constellations is called 'Chandrasekhar Border'. From his theory, many secrets have been discovered about the origin of the universe. He is very famous for his magnificent 'Chandrasekhar Border'.
He showed that there is a high mass that can be supported against gravity by the pressure made by electrons and atomic nuclei.  The value of this limit is approximately 1.44 times the mass of a solar mass.  Explain that in his last interview, he had said, "Although I am an atheist Hindu, but when I see it with a logical point of view, I find that God is the greatest and most wonderful invention of God.Indian scientist Subrahmanyam Chandrasekhar is named after the scientist who received the Nobel Prize in Physics in the year 1983. Chandrasekhar Border  This is the maximum mass of a static white wave star. After greater masses, the process of breaking the star begins and it turns into a neutron star or black hole later.
Chandrasekhar had estimated this limit at the age of 20. He found the Nobel Prize in Physics for those important discoveries, on the basis of which the theory of 'the post-developmental phase behind heavy masses' was made. Presently this principle is universally acceptable in all the world.