ISRO's announcement will be launched on July 22. 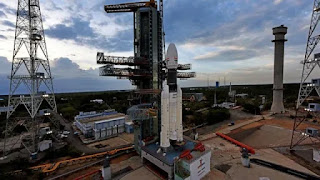 Indian Space Research Organization (ISRO) will now launch the Chandrayaan-II mission on July 22 at 2.43 pm India's second moon mission had to stop GSLV-MK-3 cryogenic engine due to leak in the helium bottle on July 15.
ISRO confirmed this by tweeting  After the launch, the second attempt was being taken between July 21 and 22 and finally the date of July 22 was fixed.Official information from ISRO has been announced that Chandrayaan-2 will be launched on July 22 at 2:43 p.m.
It is worth noting that the first launch was to be held on July 15 but in GSLV MK lll, it had to be avoided after being leaked to the Crossover Stage on the spot.  Let us know that every launch has a time limit in which the results are likely to be found, for which the launch is being done.  It was 10 minutes long on July 15, but ISRO has one minute of every day in the rest of the month.
According to scientists, in order to not launch until July 31, Chandrayaan needs more fuel.  Apart from this, Chandrayaan's goal is to move the Moon for a year, but due to non-launch of time, this time can also be reduced by 6 months.Given the potential launch, an alert has been issued from 18 July to 31 July from 2 a.m. to 3:30 p.m.