Chandrayaan 2 will be launching at 2:43 pm today. 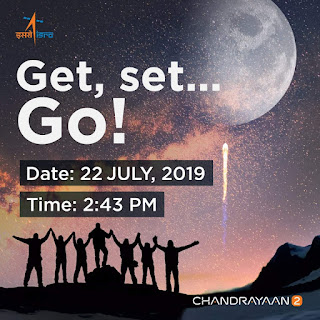 Chandrayaan-2 will be launched today with the most powerful rocket GSLV-Mark III-M1.The launch of Chandrayaan-2 from the second launch pad at Satish Dhawan Space Center, about 100 km from Chennai, will be launched on two-and-a-half minutes.
Scientists of the Indian Space Research Organization (ISRO) had stopped it at 1.55 pm after the announcement from Mission Control Room 56 minutes 24 seconds before the launch of the mission on 15 July. Many veteran scientists also praised ISRO for this step. ISRO chief Dr K Sivan said that all the preparations for the launch of Chandrayaan-2 have been completed.Whatever technical weaknesses were seen in the first attempt, it has been rectified.
Around 20 hours of countdown has started in Chandrayaan-2 from 6:53 am on Sunday evening.  Chandrayaan-2 will work on 15 important missions in the coming days.ISRO was launching Chandrayaan-2 in October 2018 first. Later, its date was extended to January 3 and again to 31st January.
Later, due to other reasons, it was postponed until July 15 this year.Due to changes during this time, load of Chandrayaan-2 has also increased in advance.There were some changes in GSLV Mark 3 as well.