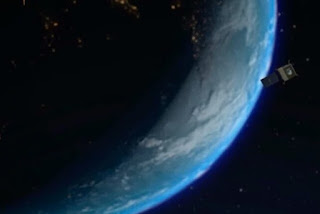 Chandrayaan-2 has successfully completed its orbital elevation in the orbit of Earth, i.e. the orbital elevation was successfully completed on Wednesday. Chandrayaan-2 was successfully launched from Satish Dhawan Space Center, Sriharikota.  Rocket GSLV Mark, called 'Bahubali' after 16 minutes of launch ...  The M1 had established the orbital earth in orbit.
ISRO said that two days after the yon was installed in the Earth's 170x45,475-km elliptical orbit, it would be the first 'orbital' through the 'On Board' propulsion system during 27-second 'firing' period at 2 pm 52 minutes  Uplift campaign 'was executed  And the new class of Chandrayaan 2 will now be 230 x 45163 kilometers.
ISRO said that the second 'orbital elevation' campaign will be carried out at around one o'clock on Friday night. After traveling around 3.84 lakh km in Chandrayaan-2, there is hope of reaching the moon on September 7.
To carry Chandrayaan 2 closer to the moon, many series of 'orbital elevation' campaigns will be carried out in the next weeks and on September 7, a 'soft landing' of the rover will be made in the South Pole region of the Moon, where no country has so far been reached.
ISRO said that the elevation campaign phases related to the Earth's orbit will be executed from Wednesday and it will conclude on August 14, 2019 with the launch of the vehicle on the launch path towards the Moon. After this Chandrayaan-2 will move forward to the moon.
Orbiter of Chandrayaan-2 will rotate in the orbit of the moon, while 'Vikram' will make 'soft landing' on the surface of the moon.After this, the Rover 'Pragyan' will come out of the lander and start his own superficial investigation.