Chandrayaan 2 installed in orbit in 16 minutes. 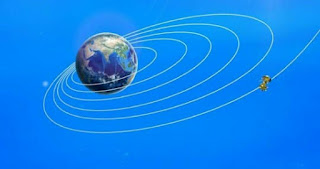 Launching Chandrayaan-2 has succeeded.Chandrayaan-2, the second moon mission of the Indian Space Research Organization (ISRO), has successfully launched.  Chandrayaan-2 was launched on July 22 at 2.43 pm with the country's most powerful Bahubali rocket GSLV-MK3.
Now to reach the south pole of the Moon, a 48-day journey of Chandrayaan-2 has begun.After about 16.23 minutes, Chandrayaan-2 will be separated from the GSLV-MK3 rocket at an altitude of about 182 km from Earth and will rotate in the orbit of the Earth. And Chandrayaan 2 was established in the orbit of the earth after just 16 minutes. After launch, Chandrayaan has reached Earth's orbit.
For 16 days it will rotate the Earth 5 times, towards the Moon, maximum speed of Chandrayaan 2 will be 10 kilometers / per second and minimum speed is 3 kilometers / per second.
The distance between Earth and Moon is approximately 3 lakh 84 thousand kilometers.  And Chandrayaan will reach the orbit of Moon after 21 days.