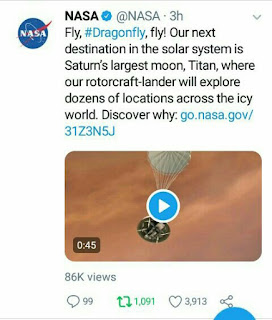 American space agengy NASA has announced a few times in advance, that our next mission is the solar system, the unique, rich biological world Titan. The same Dragonfly will be launched in 2026, which will orbit Saturn's satellite Titan, and will work till 2034.
Rotorcraft will fly to Titan on dozens of promising places and look for common chemical processes on both Titan and Earth.  And moving forward our quest for the same building blocks of life, the satellite of the Dragonfly mission Saturn will search for the terrain around the icy moon, and will also carry many types of flights to check and check the sites.
NASA will blow a multi-rotor vehicle for science on another planet for the first time; It has eight rotor and flies like a big drone. It will take advantage of Titan's dense environment - four times more concentration than Earth - for the reusable and targeted reach of the surface material, its entire science payload will become the first vehicle to fly in new locations.
Titan is an analog of very early earth, and can give clues to how life can be generated on our planet.  During its 2.7-year basic mission, an impact from the Dragonfly biological dune will detect different environments where the liquid water and complex organic matter for life were once simultaneously present for thousands of years.  Its instruments will study how much progressive chemistry has made.
They will also examine the atmospheric and surface properties of the Moon and its subsurface ocean and liquid reservoirs.  Additionally, the device will discover the chemical evidence of past or present life. The same NASA administrator, Jim Bridestein, has said, "With the Dragonfly mission, NASA will do the same again, which nobody else can do.
By going into the mysterious ocean world, we can bring revolution in whatever we know about life in the universe. This sophisticated mission would have been unthinkable even a few years ago, but now we are ready for the amazing flight of Dragonfly.