May 19, 2019
National Aeronautics and Space Administration,(NASA) shared an image in social media account Twitter, A view of the Earth at 36,000 nautical miles, which draws photos from the Apollo 10 spacecraft during the trans-moon journey to the moon. 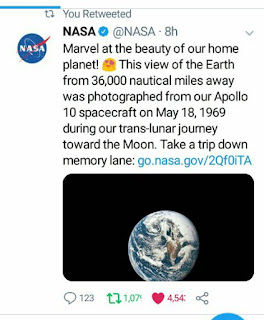 This scene of the Earth was taken from our Apollo 10 spacecraft during the trans-moon journey on May 18, 1969 in . this in image  The Yucatan Peninsula is ambiguous by the clouds, in response to the Isthmus of Tehuntpec, almost all Mexico can be clearly depicted.  The Gulf of California and Baja California and the San Joaquin Valley can be easily identified.  Apart from this, Delta and Texas coastline of the Rio Grande River are visible.