May 15, 2019
Hello friends, today we will talk about the Indian Space Agency ISRO's Chandrayaan 2 Mission. Friends should tell you that ISRO is now in the preparation of Chandrayaan 2. ISRO said on Wednesday that India will send 13 payloads for the second moon mission to be sent in July, and will also be a tool for NASA of US space agency.  ISRO has given the latest information about Chandra Mission, '13 Indian payloads (eight on orbiter, three on the lender and two payloads on the rover and NASA will have a passive expiration ...).
The weight of this spacecraft is 3.8 tons.  There are three modules (specific parts) orbiter, lander (Vikram) and rover (pragyan) in the vehicle.  All modules are being prepared to be sent to Chandrayaan-2 during the 9th to 16th July, 2019.  Chandrayaan-2 is expected to land on the moon on September 6.The orbiter will circumambulate it at a distance of 100 kilometers from the surface of the Moon, while Lander (Vikram) will easily land on the Moon's southern pole and rover (pragyan) will be used in its place.  ISRO will be using the GSLV Mark 3 launch vehicle in this campaign.  And The rover will use scientific experimentation on the Moon's surface.  Equipment is also used for scientific use on landers and orbiter.  ISRO president K.  Sivan had said in January, "We are going to land at the place where no one has arrived - that is, on the Moon's southern pole.  This area has not been reconstructed so far. 'Chandrayaan - 2 is the upgraded version of the previous Chandrayaan-1 mission.  Chandrayaan - 1 campaign was done about 10 years ago. 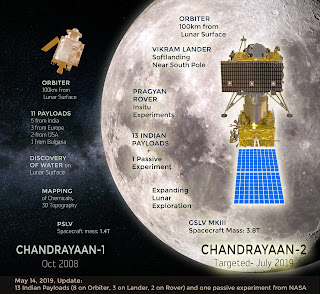