The discovery of the solar system ?

April 12, 2019
Who is the solar system?
In the Solar System, the Sun and many planets, astronomical objects are inserted, and all these celestial objects are bound by the gravitational force of each other in the Solar System.
Some orbits revolve around, the group of objects of these celestial bodies called the planetary system Which does not have other stars, such as asteroids, dwarf planets, natural satellites, asteroids, meteors, comets, and celestial dust. Our solar system is formed by combining our sun and its planetary bodies.
These celestial bodies include eight planets, their 166 known satellites, five dwarf planets and billions of small bodies.Except for some notable exceptions, it took thousands of years for humanity to know the existence of a solar system. 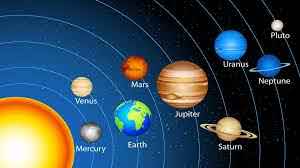 Before exploring the solar system.
Before the discovery of the Solar System, humanity's thinking was somewhat different.People first thought that the Earth is the center of the universe and is clearly different from the divine or northwestern objects roaming in the sky. But in 140 st Claudius Toulmy said (according to the Jeocentric concept) that the earth is in the center of the universe and all the house objects revolve around it.
Solar system search.
Nicholas was the first European astronomer who considered the Earth to be outside the center of the Universe, that is, to apply the Heilosentrism model. Earlier, the entire Europe believed in Aristotle's concept, in which the earth was the center of the universe, and the Sun, the stars, and other bodies revolted around it.
Copernicus' book, De Revolutionibus, was published in 1530, in which he said that the earth revolves around its axis and completes the revolution in one day and completes the Sun's journey in one year. Copernicus composed protopic tables to find the position of stars which became quite popular among other astronomers.
In the 17th century, Galileo Galilei, and Johannes Kepler address pressed that the earth revolves around the sun after the invention of the telescope began to search for planets and moons and around 1704, "Solar System" word was first published in English was done.
Galileo Galilei discovered before the physical details of the solar system and they know were found in orbit four satellites around Jupiter and Galileo Galilei discovered the Christian Hujens discovered four of Saturn's moon Titan and Saturn, the rings and in Giovanni Domenico Cassini was discovered four satellites of Saturn and Sun in search of Binary Stars in 1781 when he saw a new comet. Its class showed that it was a new planet, Uranus.And thus our solar system was discovered.