How did the earth come into existence?

April 25, 2019
Earth is the only planet of the Solar System, where life is.Earth is where we live.Earth's history describes 4.6 billion years ago, from the creation of the planet, to the most important events and basic steps of its development till date.
Almost all the branches of natural science have contributed to clarifying the major events in Earth's history. The age of the Earth is about one-third of the age of the universe.There have been extensive geological and biological changes during that period.
When did Earth come into existence. How the earth was born, and how the earth came into being. This question always remains in our values. How come our earth came in existence?
The response to these questions gives the Big Bang theory, how our earth was created.The Big Bang Theory tells us how our earth was created.According to the big bang theory ke, the entire universe was in the form of an unitary unit of about twelve to fourteen billion years ago.
At that time no concept like human time and place was in existence. According to the Great Blast theory, about 13.7 billion years ago, this explosion caused high energy emissions. This energy was so much that with the effect of the universe, the universe is spreading till date.With the bang of this big bang, the amount of gas in the Brahmin washed up, the gas started flowing.
In addition, the Solar System (which includes the Earth) was formed, with a roaring cloud of interstellar dust and gas (called the Solar Nebula), which was rotating the center of the galaxy.Dust and gas cool clouds interconnected due to gravity among themselves, form the Sun in the middle of the Solar Nebula. Just like the way a star arises. After the construction of the Sun in the middle of the Solar Nebula, the particles of the remaining nebulae create a disc, roaming around the sun.
Due to the small partial gravity spinning in this disc, they are joined together to make big particles. But still some light and very small elements like hydrogen and helium remain in the area near the sun. But due to the Solar wind by the sun formed between the solar nebula, this light element moves slightly away from the Sun. But not very far away and save near the Sun.
Very heavy and big material These large materials begin to interconnect by gravity. The elements which are very heavy are the first ones to connect with each other and create the terrestrial planets that are the core of the terrestrial planet. terrestrial planet like Venus, earth, Mars, Mercury When these terrestrial planets become the core, then on the core of this core, the thickness of less than the material of the core becomes associated with the cause of Gravity above the heavy core.
The heavy material goes towards the core, and the light materials keep coming up. And make layers of crust. And thus, 4 large terrestrial rounds are formed. In the newly created solar system, small particles collided with these four big objects and formed terrestrial planets like Mercury, Venus, Earth, and Mars.After the collision of continuous objects, the time came when the material collision with the earth stopped. The new bunny earth was quite hot. With the passage of time gradually the earth started getting cold. The earth attracted some gases from Gravity to the outer layer of the earth.
The collision and friction of the tectonic plates in the mantle's layer below the earth's crust created large mountains and volcanoes. And the gas from these volcanoes made the earth's atmosphere. The cold frozen ice mass striking the earth and the rock brought the existence of water on the surface of the earth.
Which came from outside the solar system. But the distance from the Earth's Sun is a very special area. Where the heat was in such a balanced quantity, so that the water was neither in the state of the snow nor in the state of steam, but in the liquid state.
In the early days of Earth, Mars was a planet shaped. Whose name was Theia.Some conflicts of earth separated from this conflict,And began to revolve around the earth,By collecting particles from Earth for several thousand years, they made a round around the earth.This round made a ball which we called the moon.And thus our earth and moon were born. 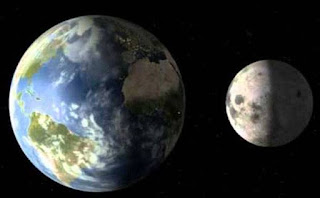